In 2010, three Cornell University students committed suicide within a month of each other by jumping off a bridge on the Ivy League school’s campus. In response to mental health advocates and national outcry, Cornell installed safety nets on the bridge in 2012.

Mental health has become an increasingly prevalent issue on university campuses across North America, and suicide has risen to become the second most common cause of death for Canadians aged 15-24 after auto accidents. Many attribute this spike in mental health issues and suicide rates to increasing pressure to succeed at university.

Currently, males are four times more likely to commit suicide than females are. Since men are more heavily scrutinized in terms of status and earning potential than females are based on mate choice and evolutionary biology, it makes sense that increasing pressures to succeed and land a good career are weighing more intensely on the mental health of boys than girls. That being said, reported cases of mental health are roughly equivalent across genders, so both sides are feeling the pressures of university. 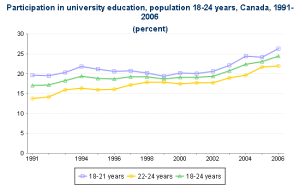 I wrote in a previous article that mental health in university is affected by grade inflation in high school. Thirty years ago, only 10 percent of students were on the honor roll; today that number is close to 40 percent. The high school curriculum has not changed radically, but competition to get into university has.

In Canada, the entrance average to get into the top universities hovers close to 90 percent. With a university education being so highly desired by today’s youth, we are seeing fierce competition amongst high school students that is artificially driving up entrance averages despite the fact that the quality of education or quality of the students has not significantly changed. To help their chances at achieving high grades, more students than ever are attending summer school to take a course or two and maximize their chances of padding their average.

It’s a simple formula: devote time to a course or two during the summer, get an inflated grade due to the increased amount of time spent on the coursework, and consequently decrease your course load in the upcoming school year. While this seems like a great idea on the surface, it’s not adequately preparing students for the struggles of university as well as the real world, which doesn’t involve studying, but work. Less youth than ever before are unemployed, but that doesn’t necessarily equate to a higher unemployment rate (or underemployment rate).

In fact, due to choices students are making in lieu of summer employment, such as summer school or volunteering, less youth are choosing to work because they believe that a higher average or volunteer experience will help them more with their university application.

The problem with this approach is that it is not adequately preparing students for the struggles of the real world, where they may need work experience to even land an in-between job while they search for one after university. Additionally, working at an entry level job at a fast food restaurant, retail store, or a summer camp provides many skills that you can never learn in a classroom or will never be subjected to in a volunteer position that is not as intensely monitored.

Video games are one of the more popular forms of entertainment on the planet, and they have come a long way since the development of Space Invaders or Pong. Most big budget games now have the polish and presentation of a full-length Hollywood feature, and some game launches have produced lineups akin to Star Wars film screenings. When game designers create a game, they pay close attention to what emotions they evoke in the mind of the player. Two of the most common psychological concepts developers toy with are flow and fiero.

Flow is the feeling of being “in the zone”, where the game just becomes a blur because it is so entrancing in its entertainment value. For those of you who used to play World of Warcraft for hours on end, you can relate to this. Many of the most popular and addictive games throughout history mastered the emotive response of flow and sucked gamers in for hours of enjoyment.

Fiero is the Italian word for pride, and it is used to describe those moments of emotional high or elation after a victory of sorts in the game. Defeating a boss, finding a rare item after hours of searching, or even completing the game are all examples of fiero. Moments of fiero help to break up the “flow” of a game to provide an emotional roller coaster of sorts.

If you were to picture this graphically, imagine flow as a relatively steady line with a few peaks and valleys, with fiero providing the major spikes and the occasional valley upon moments of failure, whereby flow would suck the gamer back in and rescue them from being deterred enough to quit.

The psychology behind game design is fascinating because it draws on parallels of real life and research into game design has determined the ideal ratios for moments of flow and fiero that yield the most successful experiences. A game that is about 75% flow and 25% fiero and associated failures makes for the most immersive and enjoyable game. For example, Blizzard Entertainment, the studio responsible for Warcraft, Starcraft, and Diablo, found that a drop rate of 25% for important items in the game produced the happiest players.

When designing a game, flow is the most important characteristic and is developed along what developers call an “engagement curve”. Essentially, players are presented challenges in the order that they are equipped to handle them. A player is in flow when they are learning, adapting, and overcoming small challenges as they come. Moments of fiero arrive occasionally when the player gets emotionally attached to the accomplishment. Remember that first time your Charmeleon evolved into Charizard and you cranked the volume on your GameBoy? That was a fiero moment for the ages.

So what does video game design have to do with mental health and education? We should strive to have the same balance of flow and fiero in our lives in order to be our happiest. The problem is, most people today have spent their youth taking the easy way out, ignoring the little challenges along the way and abstaining from a solid “flow” of sorts, in hopes for the fiero moments.

Many high school students are not mentally able to cope with failure because they have barely experienced it by the time they get to university. As a result, when a good number of students inevitably bomb their first big midterm, their engagement curve was simply not prepared. Some students respond by adjusting their strategy to get their mental health into a state of flow by taking the small steps to overcome challenges as they arrive. Other students will not be so lucky, and this is when mental health issues arise.

When you place a group of overachievers in the same environment, competition will be fierce. When you factor in that university classes need to be bell-curved to an average of about 71-74%, many students attending universities with entrance averages approaching 90% will no doubt be mentally impacted.

Today’s students need to start challenging themselves to the point that they experience failure, small or large, so they adequately condition themselves to cope with failure in university. The high school curriculum is not likely to get markedly more difficult, so students should seek external challenges. This is why more students need to work summer jobs.

A job presents an unpredictable set of challenges and a set of failures that help to mentally prepare students for university and beyond. You’re put in an unfamiliar situation, you make mistakes, and you have to deal with difficult people. If a summer job is not an option, consider pushing your comfort zone with challenging tasks such as a canoe trip or other outdoors related endeavours.

In today’s world, many youth are deprived of outdoors experiences, yet these offer youth a multitude of challenges and tasks that help them progress a mental engagement curve. A summer job or going camping will not necessarily increase a student’s grades, but it will help them get into a state of flow in terms of mental health because their mind will be accustomed to failure and how to overcome it, often in moments of fiero.

The problem is that by seeking moments of fiero while not being in a state of flow, a person risks constant states of anxiety. The other side of the coin is that by not challenging themselves enough, the risk is boredom. Humans need a steady balance of challenge and success to be their happiest. 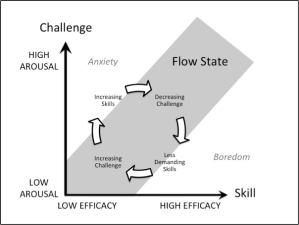 Any successful game has equal moments elation and frustration, with most of the gameplay being a steady progression of learning, applying, and overcoming challenges. Today’s youth are too concerned with the fiero moments of their lives without realizing that 75% of your life should be spent in a state of flow.

Our media sensationalizes wealth, fame, and excess, and social media avenues like Twitter or YouTube make it easier than ever for people to connect with celebrities or even briefly become one. Along the way, we forgot the value of working a crappy job and all the lessons it teaches. We need to re-evaluate how we are challenging our youth and realize that failure is a necessary part of success. Very few people can play through an entire game without failing once, so we must work on perfecting our own state of flow so that we can optimize the fiero moments in our lives.