In the aftermath of the 2016 American Election, a common theme has been the push to make sense of the situation. For a result that shocked many given the tone of most media sources leading up to the election, truth and the ability to make sense of the world have been in high demand. Many reasons were listed, but I’m not here to discuss them – I already outline a great deal of why it was such a shock in this article – but my aim is to discuss one subject of controversy that was highlighted during the American election: fake news sites.

Propaganda has always been a powerful tool ever since totalitarian regimes in the 20th century realized that they could harness the power of mass media and use it to exploit basic human psychological and moral tendencies. Fake news sites are an extension of our propensity to follow narratives we have already formed within our minds in order to support our pre-conceived notions about whatever the issue in question is. This phenomenon is commonly known as confirmation bias.

We already know what our decision is, and it is our refusal and tendency to be more open-minded that is preventing us from making an informed decision on that issue. People love reading and sharing news stories that confirm their beliefs. Skepticism is thrown out the window when we’re dealing with issues that are deeply rooted in morals like religion, politics, or health. We would rather be right in our own minds than objectively right based on empirical evidence and facts. It makes sense: reaffirming our beliefs is an exercise traversing familiar territory. It’s “safe” to read things that support our beliefs and morals, yet it’s dangerous to go outside our comfort zones and challenge them.

This raises an interesting dilemma: one of the underlying reasons that we seek out knowledge and education is that we seek truth. Look at virtually any academic discipline. They are all exercises in learning how the world functions, either at a macro or micro level, and this is largely driven by the virtue of truth. Experiments test what happens and what doesn’t happen. Papers argue for what is right versus what is wrong. Seeking a larger truth from the suggestions of a collection of smaller truths is an exploration, and by definition explorations can be hazardous.

Truth is a fundamental basis for human existence and is valued in every society. Why else do we hate it when people lie to us so much? To be called a liar or fake is one of the worst things you can call a person; you are attacking their personal truthiness. Our entire web of relationships is based on established trust between one another. A betrayal of that is to abandon truth with that person. The outrage over fake news sites is a direct result of how important truth is to us.

The outrage has produced some commendable actions. Google and Facebook have both announced that they are taking steps to reduce the impact of fake news sites to drive down traffic to these sites. While freedom of speech is important, sites that are designed to prey on the biases and kneejerk reactions of individuals should be driven underground. They should still be allowed to exist, but their proliferation should be restricted.

With these steps in place to reduce the power and reach of fake news sites, I find it curious that there has been little coverage on the influence and reach of fake news sites that have been in existence for years. They’re not inherently political, although undertones and motivations certainly exist, yet sites that promote pseudoscientific beliefs and products have not been looped into the fake news debate. I think this is wrong, as these sites are arguably more dangerous. Several tragic deaths can be tied to the adherence to pseudoscientific practices, so it is puzzling that practices that pose very real dangers to our health are still allowed to proliferate despite the apparent distaste for fake news.

Why are sites that promote pseudoscience dangerous? There are several reasons. Most insidious is that they promote health claims that are simply untrue and can be potentially fatal to those who are misled into following them. Some particularly egregious examples include:

Tragically, this list could be much longer, and keeps getting longer every year. Promoters of pseudoscientific treatments or products are largely motivated by money. A common trait shared amongst individuals involved in these sorts of practices is that they sell false hope to their patients. They may suffer from a severe case of self-delusion themselves, but it is quite ironic that one of the main criticisms these individuals often make is that mainstream medicine and science are only in it for the money. Based on the fact that none of these individuals offer their products or services for free, they are entirely hypocritical in their claims.

The proliferation of pseudoscience is nothing new; there has always been a human appetite for the alternative and the mystical. Mainstream science is an inherently boring process that occasionally produces exciting results. What makes pseudoscience so appealing to the general population is a combination of how it is presented and the morals possessed by those it appeals to. Pseudoscience is often presented in a magical light, attaching almost supernatural properties to the mundane. This is why we need to sell something as rudimentary like fruits and vegetables as “superfoods” or “powerfruit”.

The most fundamental ideas that people have are religious, so it is no surprise that the most violent conflicts in the history of the world were largely driven by a conflict between groups of differing fundamental belief systems. Pseudoscience is closely rooted to how individuals view the world; while it may not be “science”, pseudoscience still mirrors science in the ways it helps us form our own version of truth. To criticize someone’s belief in pseudoscientific views or practices is to criticize their larger worldview and how their version of “truth” about the world is formed. The resulting reaction is not a pretty sight. 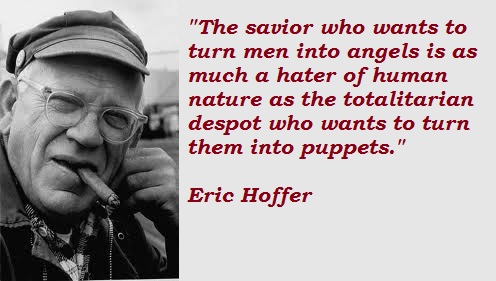 In The True Believer, Eric Hoffer describes that among those most susceptible to mass movements are “the misfits”, individuals on the fringes of their society. If one examines those most invested in pseudoscientific practices, it is clear that most of these individuals would fit into a “fringe” group in society. This is not to say that these individuals are disadvantaged – quite the contrary – as many of the “misfits” present in pseudoscientific movements are celebrities like Gwyneth Paltrow or Jenny McCarthy, but their extraordinary wealth and fame still defines them as misfits in the grand scope of society. These individuals do share a disdain for the mainstream as they seek an understanding of how their lives ended up the way they did, whether their outcomes are fortunate or not.

Recently, the Federal Trade Commission (FTC) passed new legislation that requires all homeopathic remedies to include labeling that highlights their lack of efficacy unless sound evidence demonstrates otherwise. While this is a step in the right direction for regulating pseudoscience, we still have a long way to go. Similar to politics, health is a passionate subject of discussion and can lead to heated debates due to its fundamental basis in our morals and worldview.

If organizations like Google and Facebook are taking measureable steps to limit the reach of fake news websites, they should expand these practices to limiting the power of pseudoscience websites, especially those that promote potentially dangerous advice or products. In our collective effort to decipher the world through truth-seeking activities like scientific research, the last thing we need holding us back from a future of more truthiness is a bunch of people telling us that we can cure cancer with a spoonful of turmeric and a prayer.